This blog is dedicated to my friend, P., who lives in Germany, and whose manner became noticeably chilly after the so-called help to Greece began. Here, I'll write all those things I couldn't tell her over the phone.

Into the frying pan or into the fire?

After five years of austerity and measures imposed by the Troika (a trio made up of the International Monetary Fund, the European Central Bank and the European Comission), the Greeks are finally asked to speak their minds. 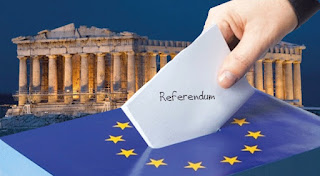 The question is not whether they want to rescue the banks or whether they'd rather follow the example of Iceland. It is not whether they want to default or burden the taxpayers with an enormous debt that no sane person sees repaid within the century. It is not even whether the rich should bear the brunt or the common folk. All the above have already been decided upon and signed meekly by governments that acted submissively towards the Troika, in blatant disregard of Greek public opinion.
Then the tide turned and the resentment of ordinary Greeks brought a moderate left party to power in January.
The new government vowed to not rock the boat too much - they promised abide by what had been signed, provided the basic human rights and dignity for Greek citizens were not violated.
The Troika, mostly egged on by Germany, frothed in the mouth and, in order to lend us even more cash that would go directly to the banks, presented terms that would be impossible to agree upon. To most Greeks, it is evident that they want to force the issue and make the government choose between submission (which would discredit it to its electorate) or resignation (which would bring the more malleable previous parties to power again).
So the government did the only thing they could do: declared a referendum.
So, now, five years too late, the people are asked to decide their fate.
Unfortunately, their choices are limited:

YES would mean argeement to even harsher austerity measures, cuts of pensions and salaries, abolition of the most basic working rights, collapse of the Health Care System, rise of taxes and many others that will effectively drive more people into poverty and strangle the economy, making the current depression even worse. After voting YES, the Greeks will be unable to protest, since they will have given their consent to their own pauperisation. However, given that austerity has brought depression, revenue to pay the debts will never be generated, and the Greeks will be forced to take even more loans just to keep from defaulting, pushing the country into debt even more. This debt will haunt Greeks for generations to come.


NO would mean that Greeks would rather not receive another "dose" of cash to repay loans if that would mean more of the same austerity that has seen poverty rise to levels not seen since the 50's and 40's. Denied of their dues, the banks will of course push (and have proven that they can) for harsh punishments for Greece, in order to deter others from doing the same. Cash will dry up and Greece will not be able to import fuel, medications and many other necessities. It is possible that hard years will follow for all but the richest.

So what will the Greeks vote?

Innundated by fear-mongering propagated by the majority of the media (affiliated with the older parties and a few rich Greek families) many people will vote YES, for fear of losing what little they have. Recipients of pensions, those who still have some savings in the bank or are still making a living wage are more prone to this fear. Others, belonging to the right and centrist parties will vote YES in the hope to receive some financial security in the form of jobs in the public sector, if they come again into power. To put it simply, yes will be voted by people who will be content to gnaw the bones thrown under the table by their masters, fearing what might happen if they ever crawl from under that table.

Those who have felt the bite of poverty, who have lost their jobs, who have moved in with their parents because they cannot afford their own flat, who have queued for soup kitchens, who have lost their homes or businesses because they were unable to pay their debts, those who are homeless, will vote NO. They will be joined by others, who fear that a YES will forfeit the future of their children and perhaps their grandchildren too. To put it simply, NO will be voted by people who see the current situation as nothing short of slavery and want out.

What will be the result?
This is a lose-lose situation.  The Greeks are squeezed between a rock and a hard place. Whichever way they jump, they'll suffer. 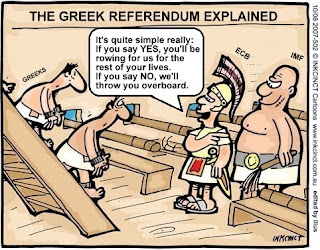 If they vote NO, the government will be in a better position to re-negotiate new terms with teh Troika. They might listen, or not. In the latter case, Greece will default, and Greeks risk immediate collapse of the economy, dire poverty and who knows what else. It's possible that there will be black marketing and deaths due to lack of medical supplies.
If they vote YES, the poverty and dying will be less acute, but will steadily worsen and go on for a longer (possibly much longer) period of time.

If they vote NO, the Greeks will be guilty of countless deaths brought on by lack of medical supplies and fuel for heating. This has already been happening ever since the crisis started, but a default will cause acute shortages for a -hopefully-short period of time.
If they vote YES, the Greeks will be guilty of exactly the same, only over a much longer period of time. The IMF itself has admitted that the Greek debt is unpayable, so Greeks will be condemned to bondage for decades to come.
To all this misery and certain deaths, we should add the possibility of social unrest - whichever way the vote is cast.

My vote
Although I have almost made up my mind that it's better to look at the long-term picture and take the plunge, I will still approach the booth with trepidation. I fear my own ignorance and my own fear. Naturally I don't have all the pieces of the puzzle, and I'm seeing only part of the picture. Am I oversimplifying? Am I condemning my children and my family to a quick and brutal death instead of holding out, in the hope that things may get better? How many people is my vote going to condemn to misery or death, whichever way I cast my vote? How many may be saved if I vote otherwise?

One last thought
The only thing that takes me out of my fear (and preemptive guilt) is this thought:
The people who planned this future and put these choices before us seem not to have spared a single thought for the human beings involved in their decisions.

And that drives me mad.